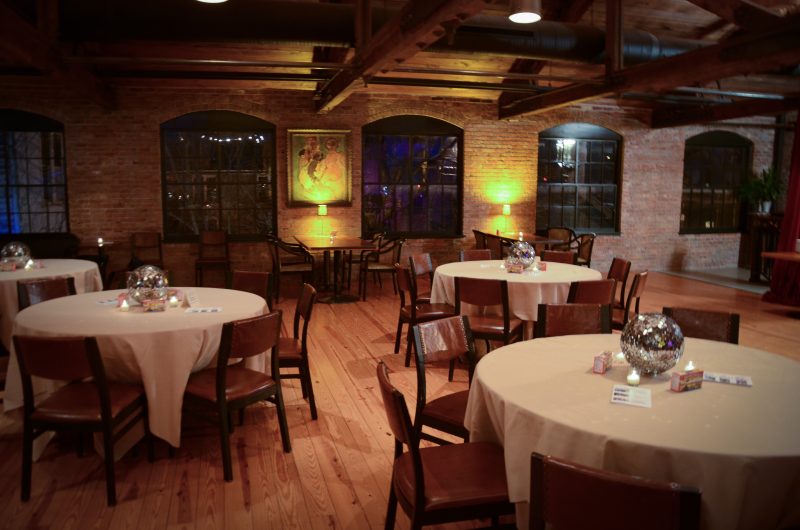 HUDSON — With a generous helping of the Bindlestiff Family Cirkus sprinkled throughout the evening’s proceedings, Winter Blast brought a bit of razzle-dazzle into the doldrums of winter on Feb. 2. For the third straight year, Hudson’s Club Helsinki was the venue for the fundraiser that supports Columbia Memorial Hospital and Kaaterskill Care Skilled Nursing & Rehab. Billed as a “Night of Wonder,” the Milling Smith Family served as the evening’s hosts. “When we moved here five years ago,” said Patrick Milling Smith, “we met Patti Matheney Schrom, chairman of the Columbia-Greene Hospital Foundation’s Board of Directors.” Subsequently, he and his wife were given a tour of Columbia Memorial by Schrom. “We had our first child at the hospital 15 months ago, and we’ll be having our second there in June.” Milling Smith, a film, TV and theater producer who splits his time these days between Manhattan and Claverack, expressed the importance of giving back to the community. “I know that for us, being here is a much better experience for our children,” he said. Hospital President and CEO Jay Cahalan said Winter Blast serves as a “tremendous help to Columbia Memorial as a fundraiser. The foundation staff and board do an incredible job of planning this event. There’s something new and exciting every year, and Club Helsinki is an excellent venue.” “It’s a wonderful event,” said Club Helsinki’s Marc Schafler. “The hospital is an important asset, and to be a part of the community is a major mission of ours. We live in a world of confusion over where you go to get your medical services. Where do you go to get help? The hospital is there for us. We’re thrilled to be a part of this. Betsy Gramkow and Gina Orlando from the hospital foundation are great to work with — they’re pros with a heart.” Performing at a fundraiser is a different kind of fun than a regular performance, said Cardone, Bindlestiff’s magician and illusionist. “Of course, any time we can make people smile and laugh, it’s great. But it’s a great thing to help a worthy cause make money. We all love what we do, and what we do is perform, and people smile.” Later that evening, Cardone would make Mary, a willing guest, disappear on stage, only to magically re-appear moments later. Winter Blast attendees also laughed and cheered at acts that included plate spinning and aerial stunts, all of the while accompanied by a quirky band composed of a violin, an accordion, a percussionist, a tuba and a saxophone. Along the way, singer Diamond Redd led the crowd through a hearty rendition of Cab Calloway’s “Hi De Ho Man.” State Assemblywoman Didi Barrett said she was “delighted to see the enthusiastic and broad turnout to support the hospital and Kaaterskill Care. It was a great evening for everyone,” she added, “and especially for the hospital.” Joining the Milling Smith family, featured sponsors of Winter Blast were AOW Associates Inc., CDPHP, Steven Harris and Lucien Rees Roberts, and Whiteman Osterman & Hanna LLP. Sponsorships and the 275 guests in attendance combined to raise $100,000.