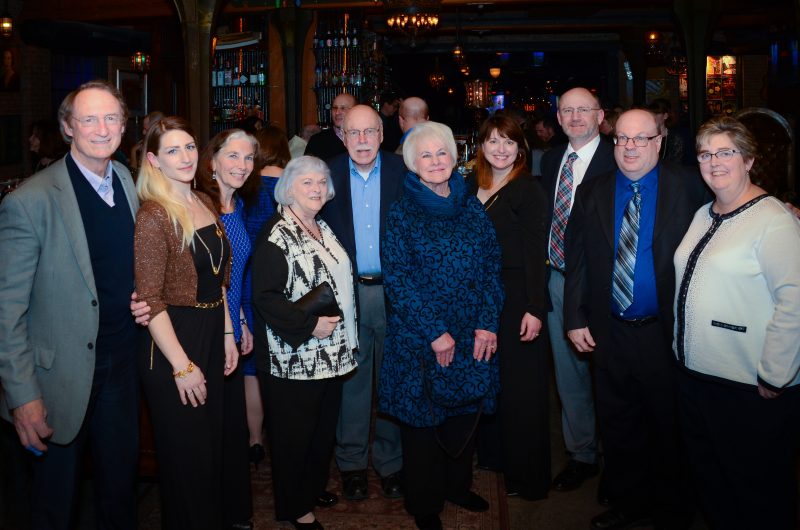 Pictured: Anne Schomaker enjoying the celebration with members of her family.

The Event kicked off at 6:30p.m. Saturday evening at Club Helsinki.

Schomaker, who has been an active member of programs such as Habitat for Humanity, Columbia County Historical Society and Columbia-Greene Hospital Foundation Board, was awarded the first Columbia Memorial Health Clara Kellner Award Saturday, as a result of her dedication to community.

Originally from Brooklyn, Schomaker moved permanently to Kinderhook in 2006 and immediately found a place with the local garden club, which began her long career in volunteerism.

“I’m totally overwhelmed tonight, and so honored – I can’t imagine.” Schomaker said. “This Clara Kellner, the award is named for her and she was truly amazing. I’m deeply honored to be given this award in her name.”

Clara Kellner was a benefactor of the hospital for many years and served as chairwoman of the Hospital Foundation Board. The award was designed to recognize Kellner’s spirit of volunteerism, extending beyond the walls of the hospital.

Columbia Memorial Hospital President and CEO Jay P. Cahalan, who has been involved with the hospital for 22 years and has known both Schomaker and Kellner, said Schomaker was a perfect recipient of the first award.

“It really honors Anne, and Clara Kellner,” Cahalan said Saturday. “Anne is involved in so many things in the community, generally, in terms of volunteerism; and so many things specifically with Columbia Memorial. She really is the perfect recipient of the award – she’s very much like Clara in so many ways.”

“She’s a tremendous, inspirational force in the community,” Faso said. “She’s active in so many things, she’s philanthropic and she’s got a vibrant personality and a sunny disposition like you can’t believe.

The garden club, Habitat for Humanity and the Columbia-Greene Hospital Foundation Board are only a few of the activities Schomaker is involved in, Faso said.

“I can’t think of any beneficial activity in Columbia County that Anne’s not involved in.”

“We are so thrilled to honor Anne Schomaker tonight,” Patti Matheney, Chairman of the Columbia-Greene Hospital Foundation said. “I think that Anne, her spirit and generosity, really is the epitome of what the Clara Kellner award is all about. We’re thrilled to give her this award tonight, no one is more deserving.”

Matheney said she would be presenting the award later on in the evening and had designated Schomaker “Amazing Anne”.

Schomaker said the next project on her list is a fashion show to benefit the hospital, which will be held at Club Helsinki on March 29, at 7p.m.

Each year, the Winter Blast brings together year-round supporters of the hospital and provides an opportunity for significant fundraising, Cahalan said.

“It’s one of our primary fundraising events and very often these events help provide very specific medical equipment, medical devices, programmatic improvements, those kinds of things and we’re really dependent on these,” Cahalan said. “It’s terrific how the community comes together. We always get a good crowd, we get a lot of support and we have fun doing it.”

Cahalan said his favorite part of the evening is when the program is finished and people are just having fun.

“I look around and I see that – it’s really my favorite part,” Cahalan said.

“Seeing friends and all the people here, and coming to Club Helsinki is always special,” Faso said.